Professional Bull Riding has been labeled the most dangerous 8 seconds in sports. The truck that mirrors that kind of tough is the F150 SVT Raptor. And one, lucky PBR fan got to wrangle a beast of their own.

Note: Some of the pieces featured here were marketing materials for the PBR Invasion series where PBR members would ‘invade’ different cities along their tour in a Ford Truck to showcase its abilities. 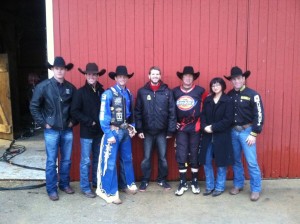 are we there yet

clash of the cowboys